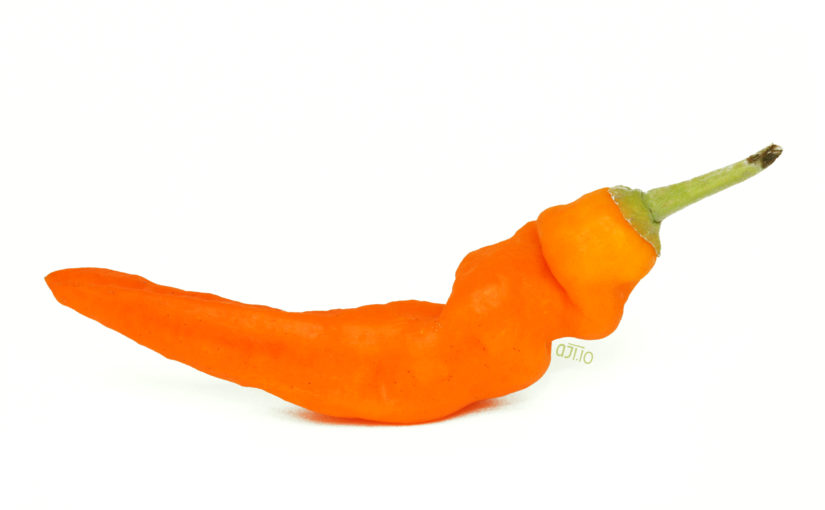 What does an Aji Amarillo taste like? Ted Danson would simply call it, “Heaven.” It has a fruity flavor that is complex and well rounded especially when cooked–almost like a spicy mango, apricot or carrot. People have compared it to tasting like sunshine!1

Amarillo means yellow in Spanish, however, this fruit ripens to dark orange. Even unripe, the green Aji Amarillo has a splendid taste with great heat! The Aji Amarillo is one of the popular capsicum baccatums. The fruits take a very long time to mature to the dark orange color, so they require a lot of patience.  Grown outside, some hardiness zones don’t have a long enough summer for them to ripen. Genetic diversity or growing environments can make these virtually indistinguishable from the Aji Golden, or quite similar to the Aji Rojo.

The Aji Amarillo goes by a few other names, such as Aji Escabeche. When dried in the sun in the Andes, it’s called Aji Mirasol. The combination of the long sun-drying process with low temperatures of the Andes bring out clean, delicious flavors, similar to sun-dried tomatoes. There are some who call the Aji Amarillo the “chili version of Carmen Miranda.”

This fiery yung fellow is famous in Peruvian cooking. It’s so popular, it routinely used as a condiment like Americans use ketchup. Hey America, B O R I N G. The Aji Amarillo has been used since ancient Inca times where it was depicted in drawings and pottery.2

How to use the Aji Amarillo To be frank, it’s culinarily criminal this pepper isn’t more widely utilized in cuisine since it tastes ridiculously more flavorful than your mainstream, normcore varieties. In heat terms, it’s on par with a Serrano or Cayenne pepper. Removing the seeds and placenta, blanching the peppers (up to 3 times), and then removing the skin brings down the heat level and concentrates the flavor.

You can use this aji to brighten up nearly any meal: pasta, fish, scrambled eggs, baked beans, chicken dishes, potatoes, even ice cream. It’s unique flavor profile is good enough to stand on it’s own, but blends very nicely with so many other foods and spices. You know you’ve gone too far when you combine fresh Aji Amarillo with dried Aji Mirasol, although you would be in good company with us!

You’re probably pondering how to get a hold of these magnificent bastards, and ponder you should! There are a few options online, if you don’t have an underground pepper dealer. A neat Aji Amarillo paste is made by Zócalo Peru, however sometimes it’s on the watery side for how expensive it is.

Or, try your local “ethnic” grocery, as coined by the baby-boomer-bourgeoisie. There are plenty ways to purchase dried Aji Amarillos as well–get yours today ya dingus! フルーツコア