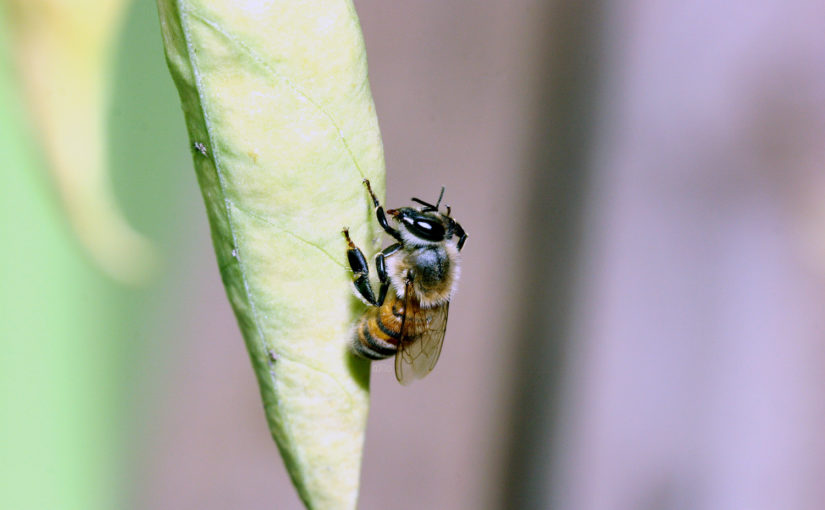 Beads? No, bees. They’re great, aren’t they? This is the European Honey Bee, otherwise known as the Western Honey Bee. It is the most common of all 40 other bee species. Buzzzzzz.

Don’t feel like carrying around a tiny paint brush, painting tiny pepper flowers to pollinate? Are people pointing and laughing from afar? Then you need to ask for the help of the honey bee, an expert pollinator. The honey bee is the most important insect for pollinating crops. Just how much?

Pollination by managed honey bee colonies adds at least $15 billion to the value of U.S. agriculture annually through increased yields and superior-quality harvests. 1

What’s the deal with Colony Collapse?

Yes, that was an indirect reference to Bee Movie.

The term Colony Collapse Disorder was coined in 2006. CCD is the mass exodus of worker bees from a hive, which leaves only the queen and some nurse bees to care for the hungry babbys. And no alimony!

So what causes CCD? A famous Harvard study controversially identified neonicotinoids as the trigger for collapse, a neuro-active insecticide. Neonicotinoids were created in part by the mega-corporation Bayer. While not entirely related, it’s interesting to note Bayer once knowingly sold HIV tainted medicine to third world countries to maintain profits.2

As it turns out, some bee experts disagree with the neonicotinoid theory.3 In fact, it is still quite a polarizing issue.4 While it would be easy to point the [middle] finger at Bayer, the drop in honey bee population is much more complicated.

Major factors threatening honey bee health can be divided into four general areas: parasites and pests, pathogens, poor nutrition, and sublethal exposure to pesticides. In reality though, these factors tend to overlap and interact with one another, which complicates issues. 1

How aggressive are honey bees?

Generally, they are very non-aggressive when away from the hive and flying solo, especially after a nice meal of Red Cherry Marigolds like our friend in the photos. However, a lack of nectar can force them into a life of crime. They will begin stealing honey from other hives in an obvious named activity called “robbing”. Mess with a hive? They have a tendency to turn aggressive fairly quickly.

When they sting, they release alarm pheromones and alert the rest of their pissed off pals to attack. This can be very bad, especially if you are allergic, and already reaching for the epipen. For these reasons, these bees are still quite dangerous, but no where near as hostile as certain wasps and hornets in the hot summer when provoked.