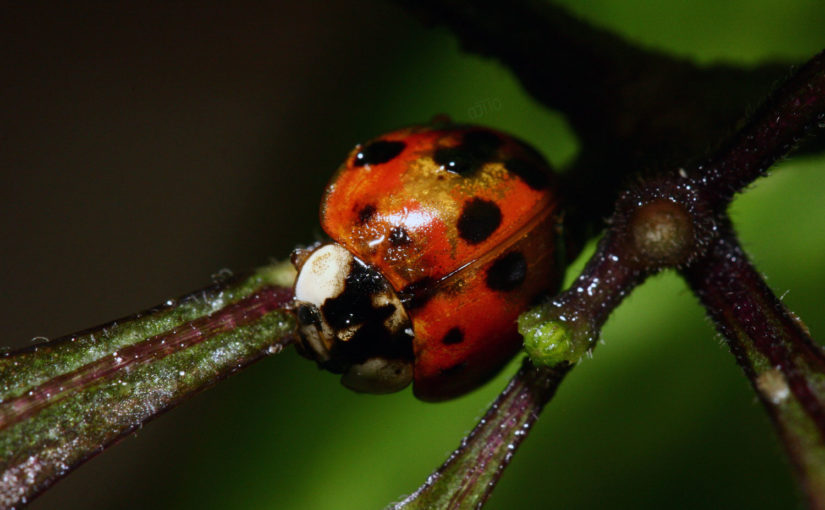 Look at those Asian Ladybugs! They are also known as the harlequin ladybird and Harmonia Axyridis. The Asian Ladybug live between two to three years.

Their life cycle begins with a female ladybugs laying groups of tiny yellow eggs on the underside of leaves. When hatched, the larvae emerge looking like black and yellow tiny alligators. In this stage, these beetles feeds on aphids, whiteflies, thrips, spider mites, and many other pests at an unprecedented rate. It’s similar to, but not as voracious as the Lacewing during this stage. The ladybug larvae molts around 4 times before the pupa stage, metamorphosizing into the easily identified flying friend.

Yes, the ladybugs in the photo are not native to North America and appear to have been deliberately introduced by the USDA during the 1970s to control aphids and other pests. They spread out of control. This is not good for native populations in the United States. To some degree, that means goodbye to the native ladybug, Coccinella Septempunctata, in places like the UK and US.

This rise of the Asian Ladybug does bring other issues, too. The demand for Ladybugs as biological pest control encourages capturing them as adults and shipping them to new areas, which can spread fungal parasites like Hesperomyces Virescens. Asian Ladybugs also make themselves unwanted house guests, attempt to overwinter in houses.

Not only have allergies from Asian Ladybugs risen over the years, wineries have had issues as well due to them being inadvertently crushed with the grapes.

Ladybugs produce a foul-smelling liquid that can be inadvertently processed along with grapes and taint the aroma and flavor of wine. Because of the potency of the compounds, even a slight amount can potentially affect a wine’s character… 1

If this wasn’t enough, Asian Ladybugs can attach themselves to the roofs of dogs mouths making them ill.2 Why would they do this to our puppers? For these reasons and out of respect to doggos, the “beneficial” score below is lower than you would think. While they do get rid of a lot of pests, they are a mixed bag. Support native varities where and when you can!

The Asian Ladybug can immediately be identified by looking for the M on the Pronoton (head and neck area). Or, you can think of it like a W for W O N D E R. They also can be identified as having around 19 spots on their wings.

Here is a specimen hanging out on a Cheiro Roxa pepper plant.